This man is neither the President nor Joe Biden 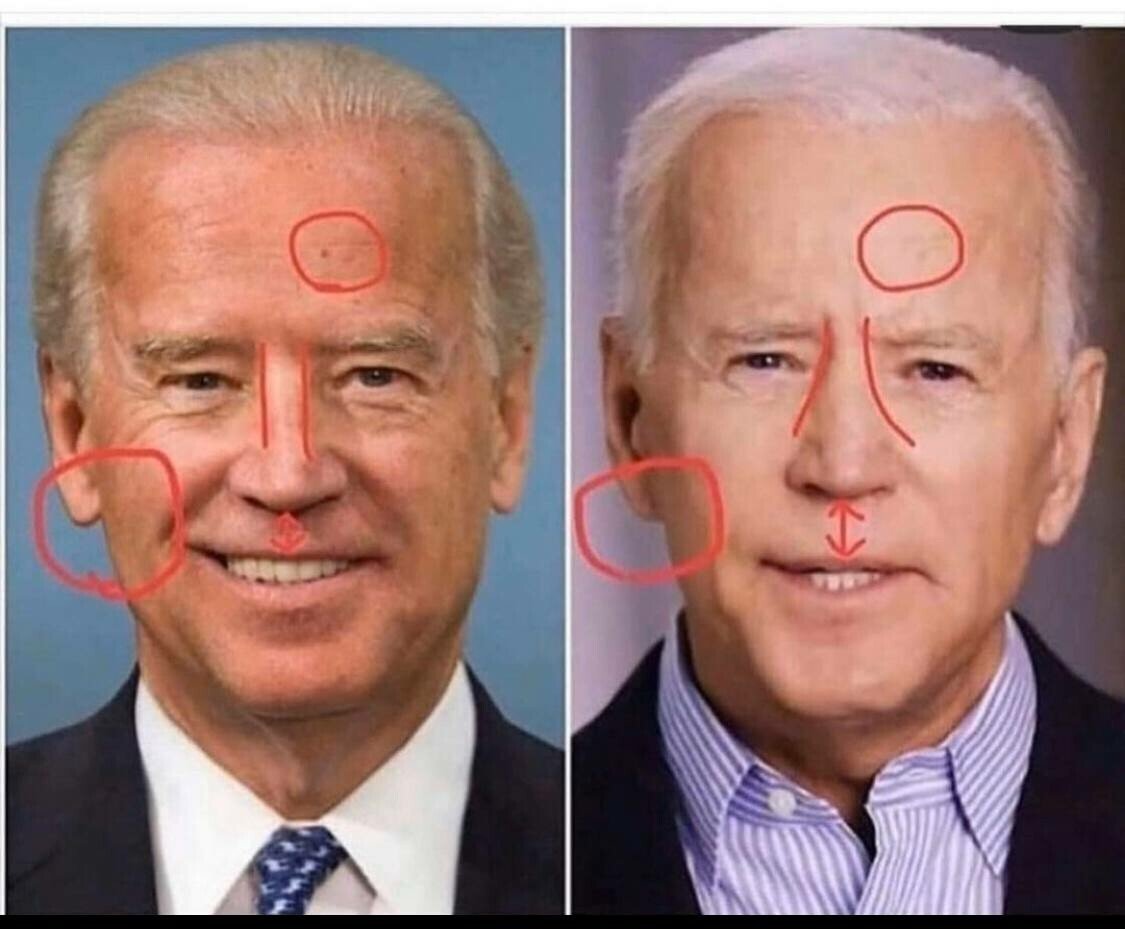 There is a list on Ranker titled “Which President do you wish were in charge right now?” It features the 44 most popular Presidents. Joe Biden doesn’t even make the list. No, Ranker is not a “pro-Trump” site – Trump doesn’t even make it to the top 10, he ranks 14. But the point here is: Joe Biden isn’t even on the list.

The problem: In all spontaneous flash-polls across the Internet, Biden is revealed as one of the least popular Presidents of all time.

How do you explain the bizarre discrepancy?

How do you explain that Biden, “the most popular President of all time” has an average approval rating of 32 to 37% in snap polls? If you’re going to fake an election, you can’t be lazy about it, you also have to fake the subsequent polls.

As I said way back in my 9th of July Video Ask Me Anything 2021, a guy who had only 6 Million Twitter followers on inauguration day (as compared to 88 Million followers for Trump and similar numbers for Obama, Clinton, etc.) couldn’t possibly be “the most voted for President of all time”, as claimed by Wikipedia, NY Times, Washington Post, etc. Biden could barely draw a crowd of 200 people when he spoke publicly – in large cities! Back then it was claimed that it is “due to Covid we keep numbers low – only invited guests!”. But he also couldn’t garner 3000 views on Youtube during his inauguration. Is that also “due to Covid”? LOL.  There are serious doubts that he is the all-time-superstar President. Trump got a record shattering 74 Million votes, but Biden was supposed to have topped that with 81 Million! 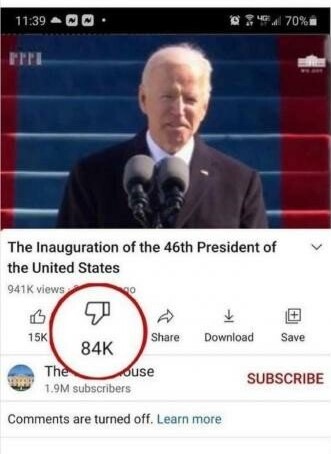 It’s not only the Democrats who make no mention of these oddities. The Republicans have also chosen to ignore reality. This creates an awkward situation for the entire nation. People intuitively sense that something is amiss, but they continue to play-pretend. The general oblivion of the public is kind of spooky.

The election was stolen. And I say that as a non-partisan who doesn’t believe in politics and never did (and articles like this are in fact a great reminder why believing in politics is a waste of time).

But there is even more: Not only is Joe Biden not the legitimate President of the United States, but the man posing as Joe Biden isn’t even Joe Biden! That’s two layers of deception!

Please view these two short clips comparing the real Biden to the fake Bidan (spelled with an a), before reading on.

You don’t have to be too astute to see that these are two different people. One is the hardened veteran politician we have known since the 1970s – Joe Biden. The other is a gentle old man, either an actor or someone wearing a silicone-mask. Maybe they made him gentle because the real Joe Biden had this un-electable “mean-streak”.

Ever since Joe Bidan is “in power”, every other public appearance has some weird glitch, hiccup or fakery. It’s almost as if the Bidens handlers are teasing us with it.

Notice how Bidens hands magically go inside the microphones in this “press conference”:

What does it mean? It means that this video is probably not in front of the white house, it’s staged on a so-called “green screen”. And yet “fact checkers” have told us that this is “normal” and due to an “editing glitch”. I wonder: Where else do we find examples of this “editing glitch” throughout Presidential History? 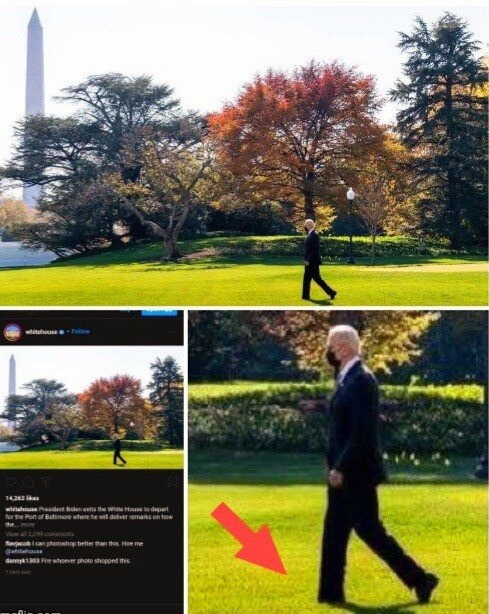 If Joe Biden were actually at the White House, they could post real photos of him walking its lawns. This is just really lazy photoshop, unbecoming of a presidential social media team.

Some have noticed that Bidan is apparently not even operating from the White House. Like when he got his “jab”: 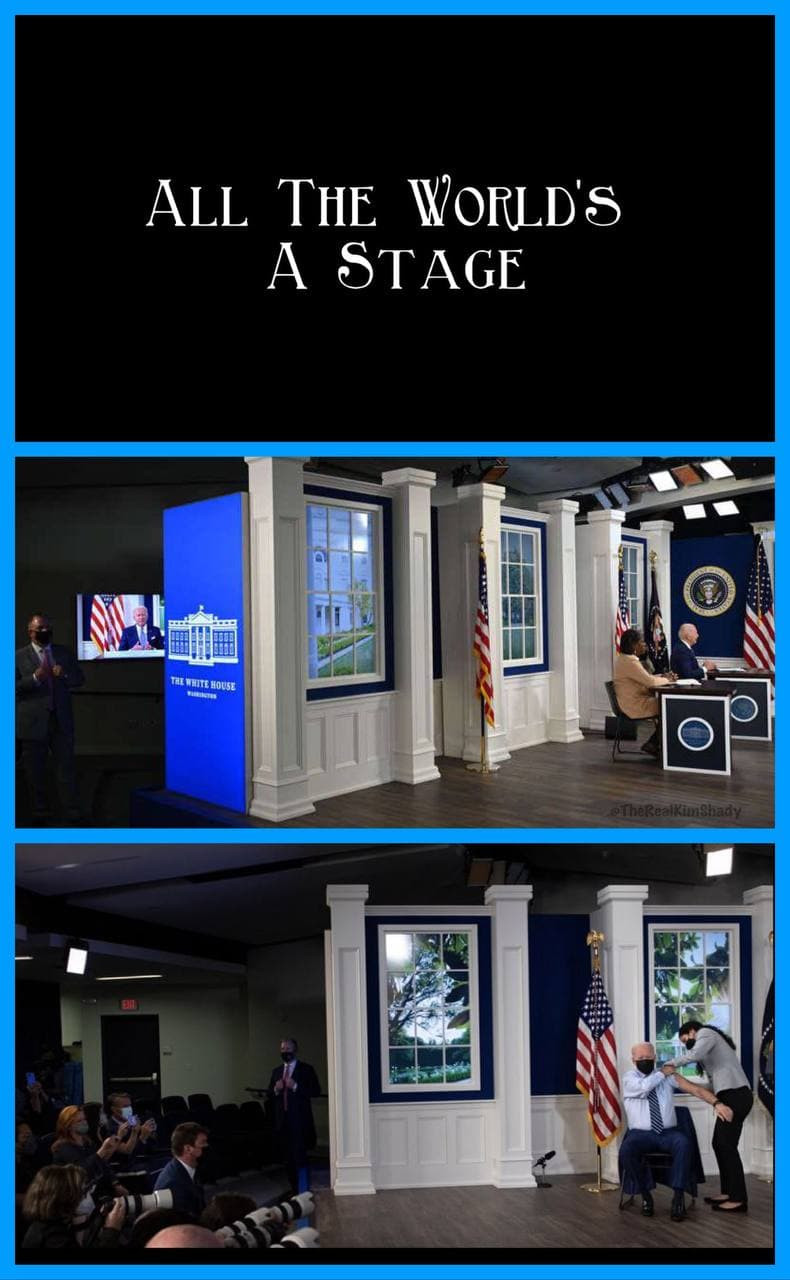 Of course the makers of the Bidan-Movie forgot that the real Joe Biden has tattoos on both arms. The fake Joe Biden doesn’t. I wonder what excuse the “fact checkers” have for that? None, so far. The fakery just piles on so much, the fake “fact checkers” can no longer keep up. 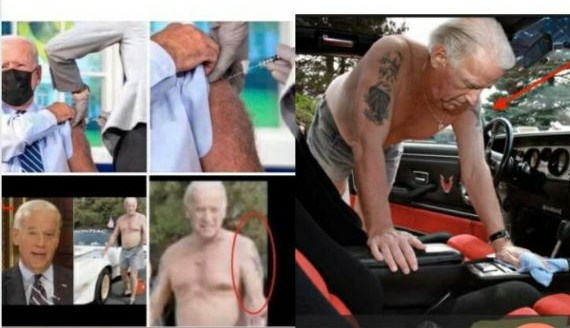 As I said, it doesn’t take a genius to see the fakery. Either they have some really lazy stagers or they want people to know it’s all fake.

Not only do the two Bidens have different earlobes, one attached, the other not, but also entirely different signatures, as seen below. 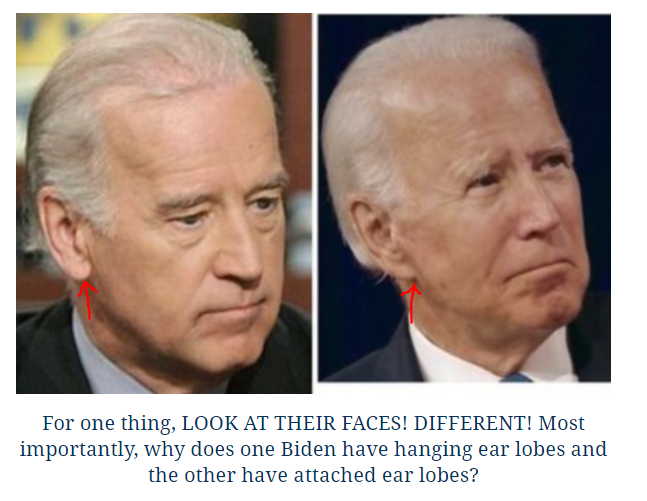 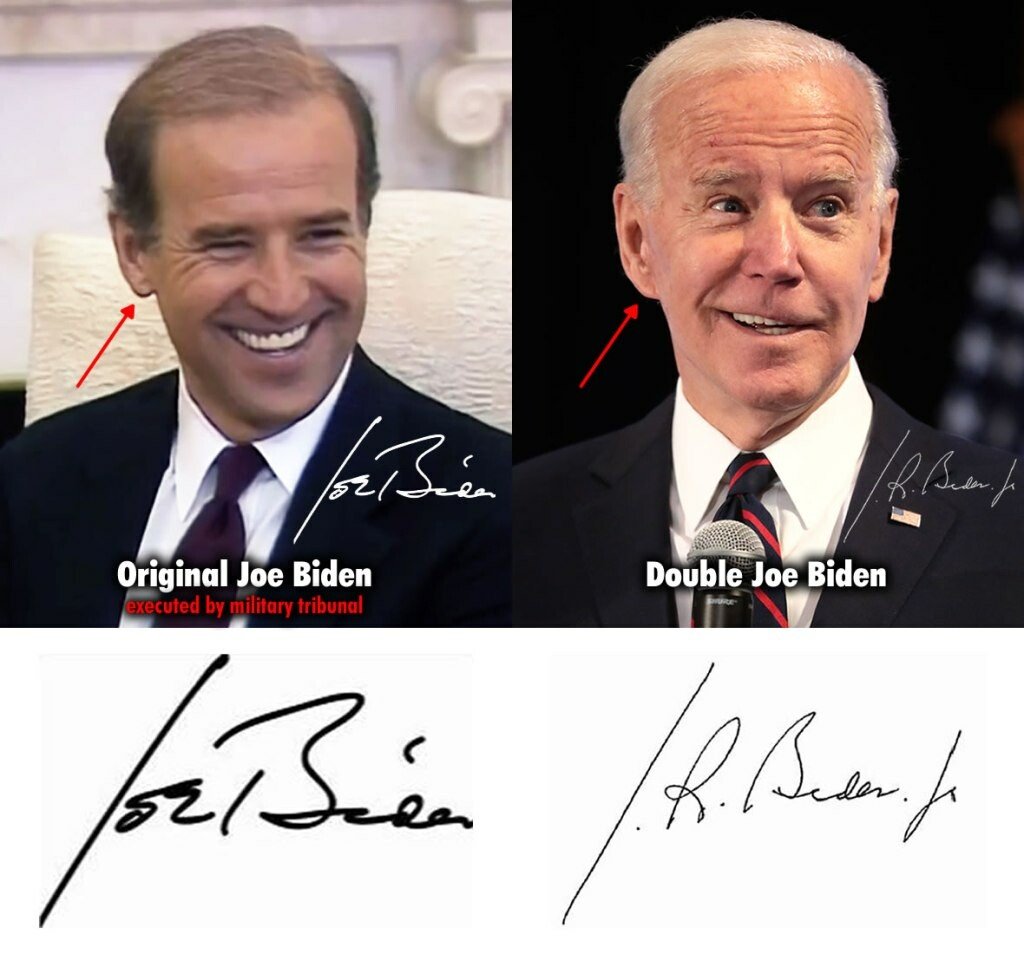 This is the white house press room we all know: 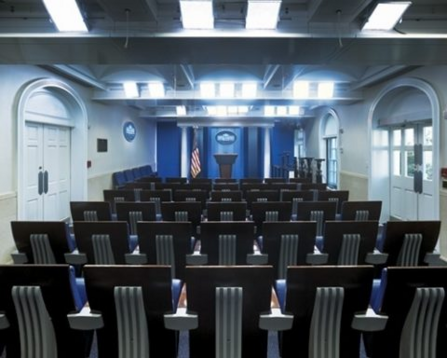 This is some counterfeit white house press room that is located elsewhere:

Biden was Obamas vice President, the public had seen him on TV almost every day for years. It is therefore astonishing to me, that they are able to pull this off, considering how different he looks. 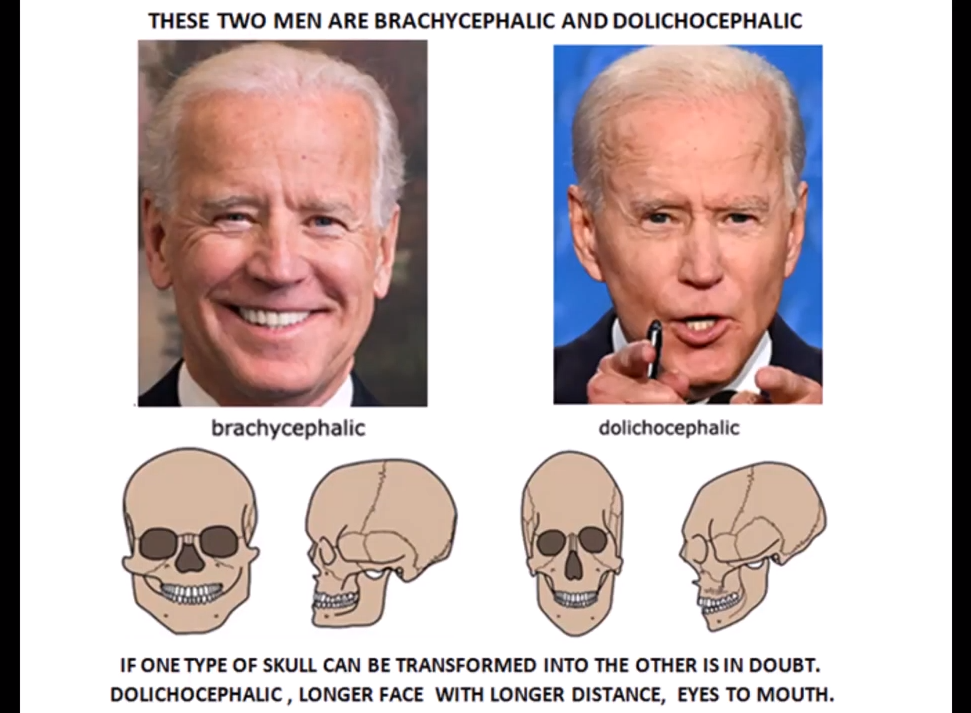 Pulling off this scam is an act of mass-reality-creation. “The media” simply acts-as-if long enough, until it’s believed.

There is a whole lot of other circumstantial evidence that Joe Biden did not win the elections. Trump won 18 of the 19 “bellwether counties”, which would normally guarantee the Presidency to any other person. But miraculously, the Presidency still went to Biden.

If Biden really got 81 Million votes, the Democrats would be advertising the fact much more strongly. You’ll notice they are suspiciously quiet about having a record-breaking all-time-superstar President. The stats are clear: No other President in History is as popular as Joe Biden. Why haven’t the Democrats used this to advertise their brand? Where are the talking heads saying “we got 81 Million!” There are many counties that have never voted Democrat, who magically and miraculously came out for Biden during the elections. With that kind of superstar-power,  why are they worried about Trump running again? We keep hearing them say “Trump is a danger!” rather than celebrate the fact that Trump doesn’t stand a chance against their superstar.

In the first weeks of the Bidan Presidency, people have noticed that the backdrop of Trumps Oval Office, is different from Bidens: 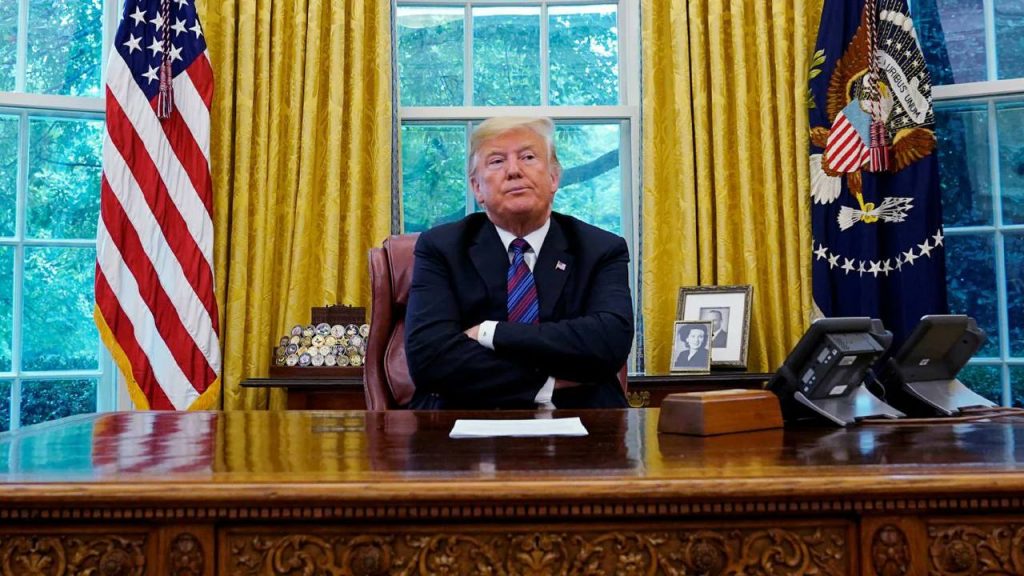 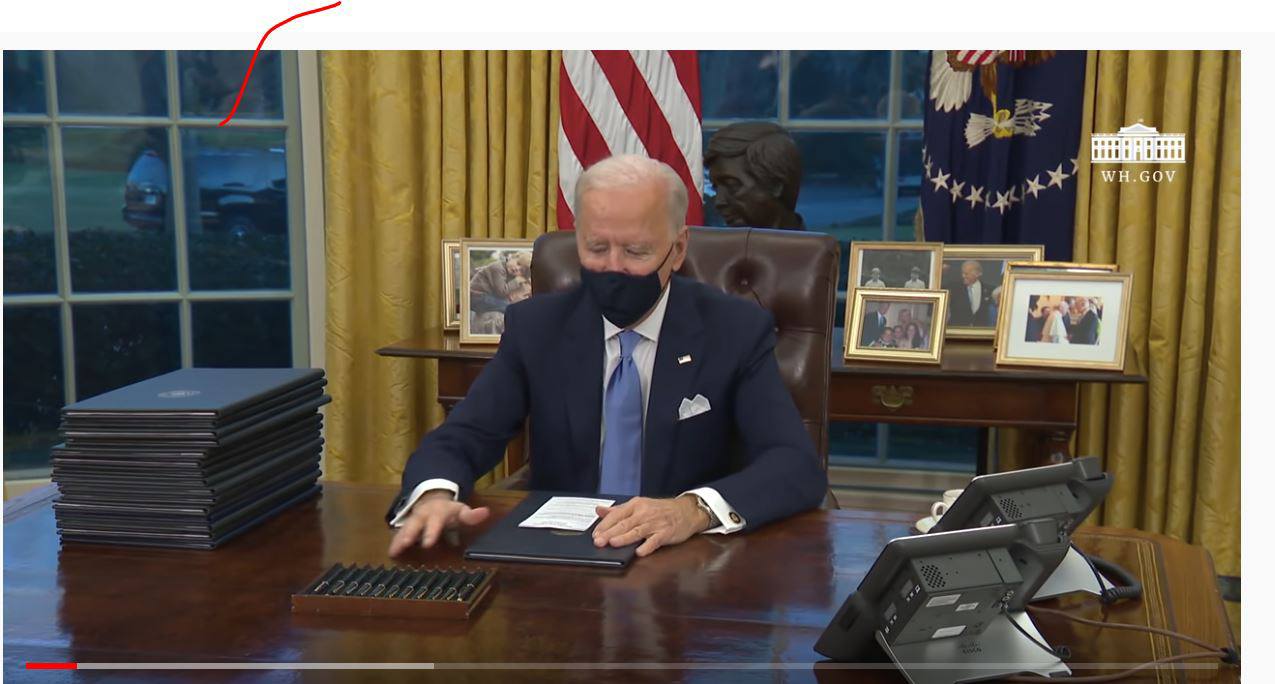 Trump has trees in the background, Biden has cars. This was the case in the first weeks, until Bidens handlers noticed the error and changed the background. The reason many people didn’t notice was because we don’t naturally expect anything like this, so we’re not on the lookout for it. You only start noticing things, once you realize that our “politicians” are ridiculous frauds. You can see why I’ve always referred to politics as a Circus show.

At some point near the beginning of Bidens “Presidency”, German Government press office posted the following image to their twitter account, revealing the “Oval Office” to be a sound stage (they have since removed the image, but I saw it on their twitter feed):

Some people have speculated that Biden is operating out of Castle Rock Studios, where there is a stage white-house that was used in movies like “Independence Day”. One of the reason people have thought so, is because Bidens Oval Office shares deco and carpet color with the studio white house. 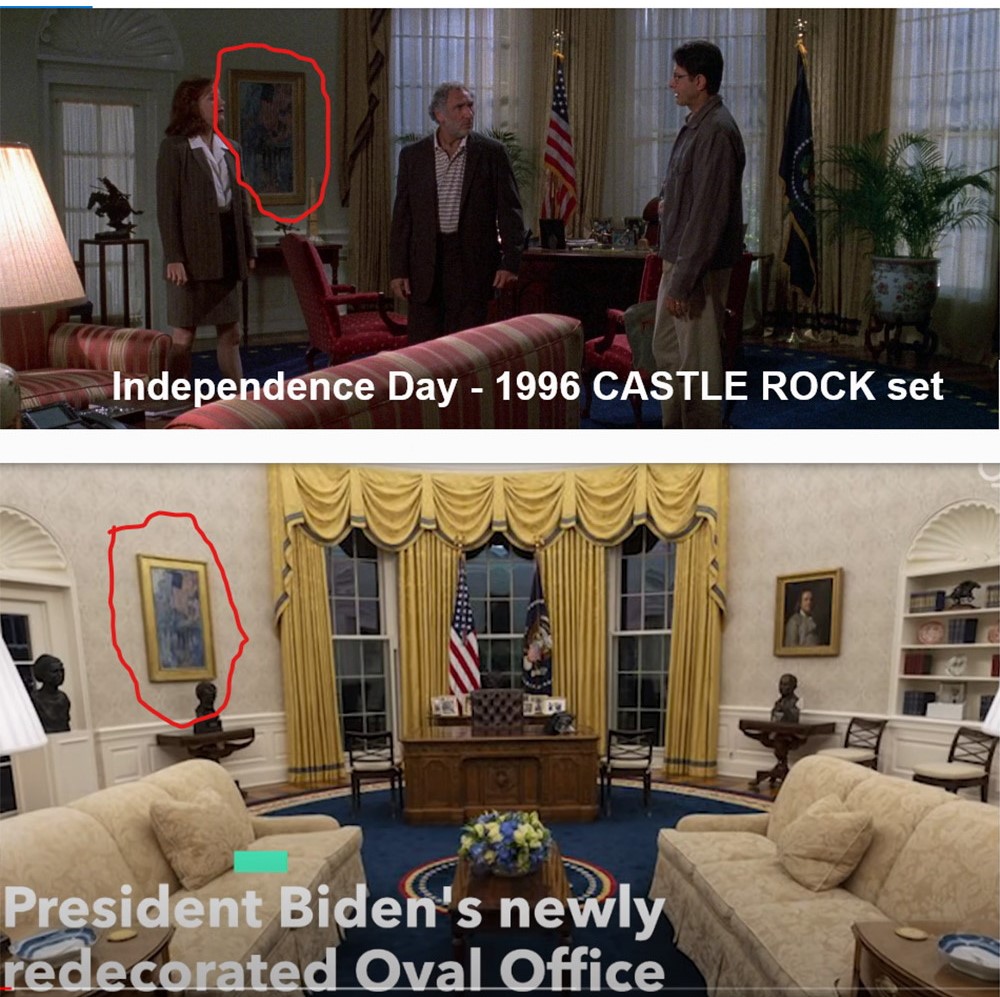 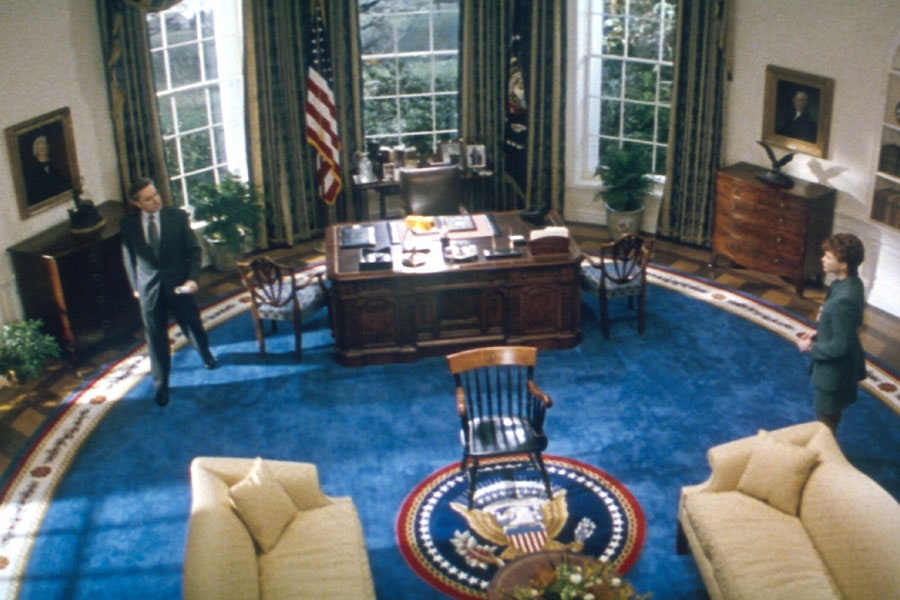 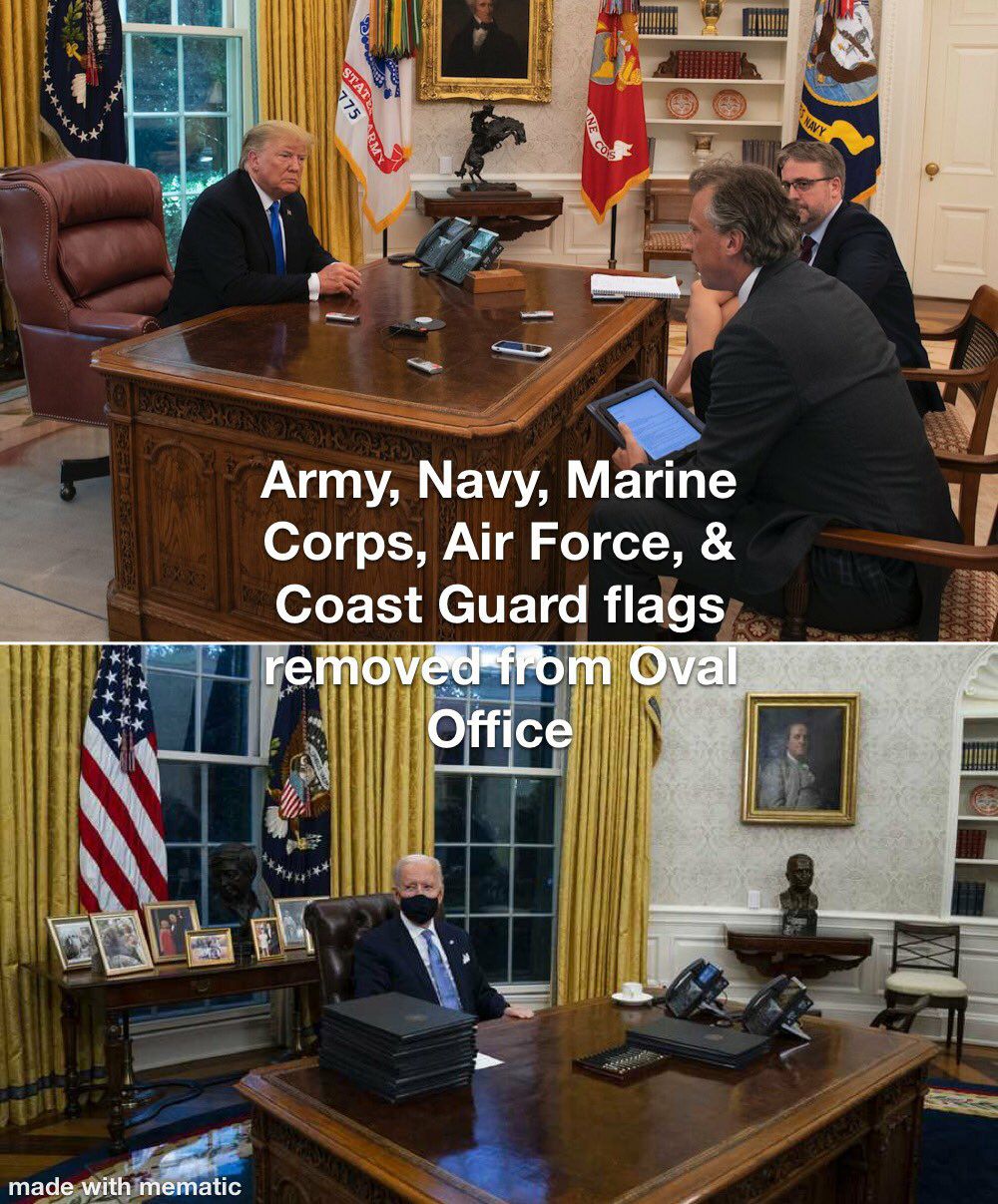 Some say that Biden has yet to be seen at or near the White House. They say that the White House was mysteriously fenced off for all of 2020 and most of 2021, using “Covid” as an excuse.

Public appearances by Bidan are gaffe prone, as if intentional. Whoever is running the show either has a weird sense of Humor, or they mean to reduce the reputation and dignitiy of the U.S. Presidency. 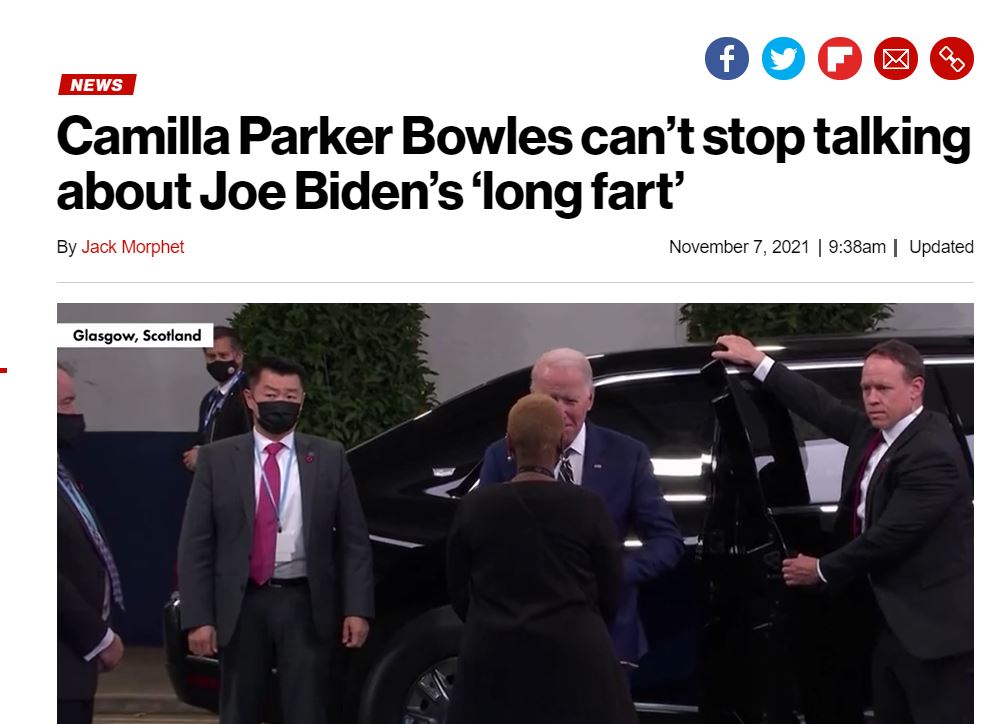 One of several embarrassing photos: 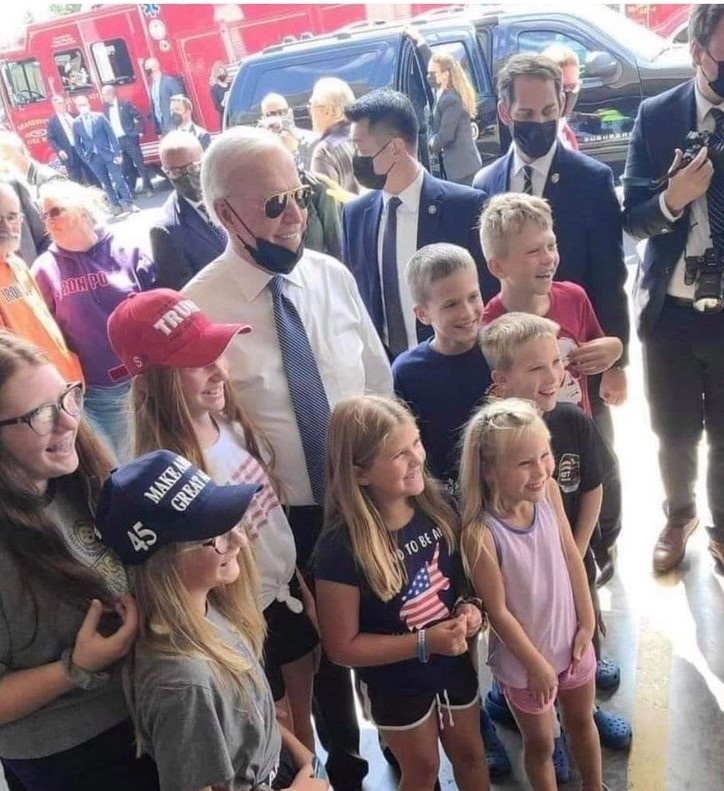 Under normal circumstances, a photo of smiling Biden surrounded by Trump-supporting children wearing Trump and MAGA gear, would have never been allowed. It’s not a photoshopped photo, as initially claimed by “fact checkers” (and later retracted). The photo is real and taken during Bidens visit on September 11 to a fire station in Shanksville, Pennsylvania. The fire station was one of the first responders to the 9/11 attacks. After it was revealed to be real, fact-checkers changed their story and claimed that Biden did this intentionally as to “demonstrate what Democracy is all about”. LOL.

Some believe that these Trump tweets are hints that Biden is not Biden: 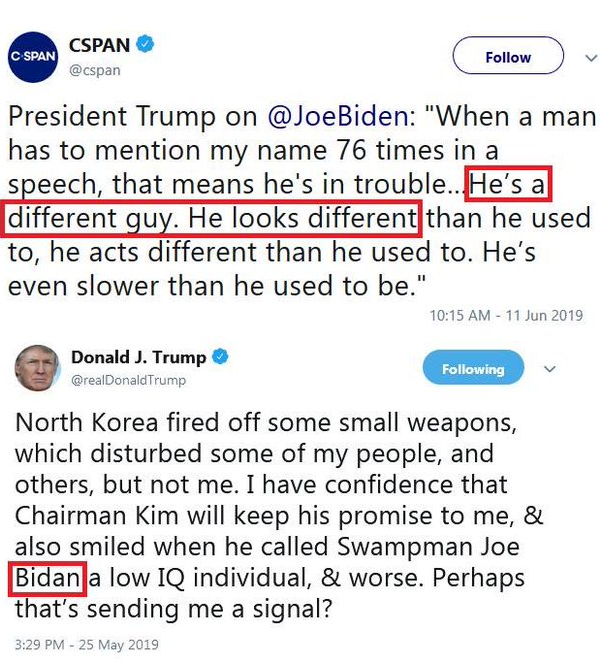 If Bidan is an actor wearing a mask, here is a photo that appears to show the mask coming lose: 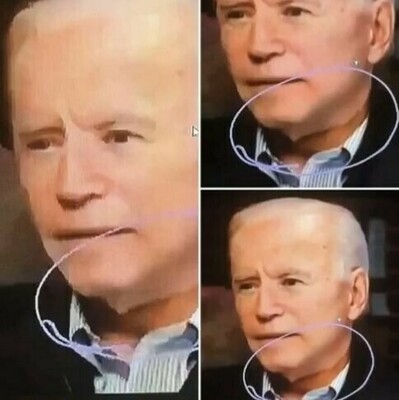 On a search engine, search any random old speech by Biden. I just found this one for example: Biden speaks in Ivy League University in 2015.

And then search for a recent Biden speech. This one for example: Biden State of the Union 2021.

Check the face, the voice, the demeanor, the earlobes, the eyes. They are not the same person.

So…if Joe Biden is not the President or Biden isn’t even Biden, then what is going on? Who is running the country?

Are the “good people” or “bad people” running this scam? I don’t know. But let me ask back: If one is running a scam, could they really be labeled “the good people”?

The reason this scam is so easy to pull off: The craziest things are the easiest to hide because the average mind is unwilling to even entertain them. But if you look neutrally, without political bias, it’s easy to see. While people are preoccupied with ridiculous “left wing” vs. “right wing” talking points, the entire political process has been hijacked and made a joke of. If you understand that one of the largest countries in the world currently has a fake-President and fraudulent elections, you’ll understand that “Covid” is the least of our problems. In fact, “Covid” (which is another ridiculous scam) probably has something to do with this.

But let’s not kid ourselves: Politics didn’t just start being a CIRCUS with with this fake President. It’s always been a Circus. Over the years, people have asked me to write more about politics. I don’t wish to debate weird mainstream talking points while something else entirely is going on. A noisy conflict between A and B is the easiest way to hide the existence of C. Thus, Republicans and Democrats are at each others throats over nonsense, while the country is run by neither. What can you, as an individual do about it? Well, don’t be distracted by it. Don’t follow these people. Make your own success. That’s my best advice.

All sages speak of the illusory nature of the world. Biden isn’t the only one who isn’t really himself. You too have not yet fully discovered your true self. The more real you become, the more unreal the world becomes. The more you discover your true self, the more clearly you discern truth vs. falsehood in the world. Therefore, if you notice all this weirdness and have already noticed things like the fact that Biden isn’t Biden, it’s not because you are crazy, it’s because you are very much in touch with yourself.

You may copy or share the material published on this website with proper attribution back to this site.

To learn when new articles are posted, simply bookmark this page and check back periodically or follow on Telegram.